What is Voxalyze Visibility Score (VS)?

Find out what Voxalyze Visibility Score is and how it is calculated. 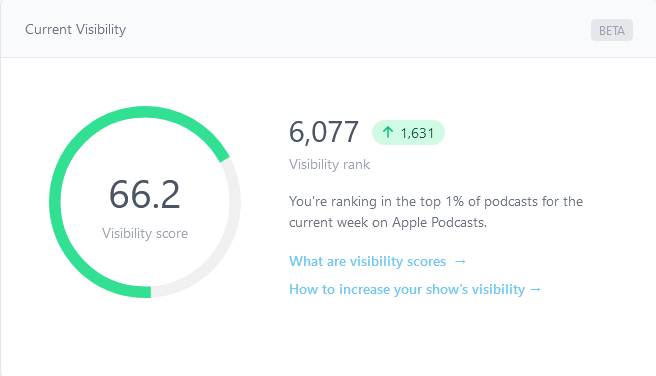 Visibility Score (VS) measures the visibility of a podcast. The higher the score, the more visible the podcast is.

Q1: “How is the Visibility Score (VS) calculated?”

Q2: “My number of downloads/listens remains the same, but my Visibility Score (VS) dropped/increased"

Because VR is a relative metric, even if your podcast didn’t lose any visibility, other podcasts could gain some visibility and overtake you in rank.

VR gets more volatile towards the lower end of the scale (the less visible podcasts). There are only a handful of podcasts ranking for tens of thousands of keywords, so it takes exponentially more effort to outrank podcasts at this level.

But at the very bottom end of the scale, podcasts tend to rank only for very few keywords. If these podcasts start to rank for just one new keyword, that's likely enough for it to outrank hundreds or thousands of other podcasts.

Did this answer your question? Thanks for the feedback There was a problem submitting your feedback. Please try again later.